I spent most of March and April working on heart rate training, designed to help me keep my heart rate down as I ran at comfortable speeds for longer distances. In effect, this was the beginning of my training cycle for a December race, the Daytona 50. I had previously run 6 marathons and 15 half marathons but had no idea what to expect in nearly doubling my longest run ever.

Fast forward past several months of training, back-to-back long runs, 3am alarms, on-course training, and over 1400 miles run since May 1st. On December 10th I drove to Ponce Inlet to meet up with my friend (and crew for the race) Denny Krahe. We left my car at the race finish line and drove to the start in Marineland, FL for the 11am runners meeting with race organizer and ultra-runner Dave Krupski. Besides the meeting, the final hour gave me the chance to get my final preparations ready and familiarize Denny with my plan. I was ready. At least I thought I was. Just before noon we heard the National Anthem (with an impromptu flyover from about 15 geese in a perfect V-formation) and then counted down to the start, exactly 6 hours after the 100-mile runners started their race 50 miles away in Jacksonville Beach. 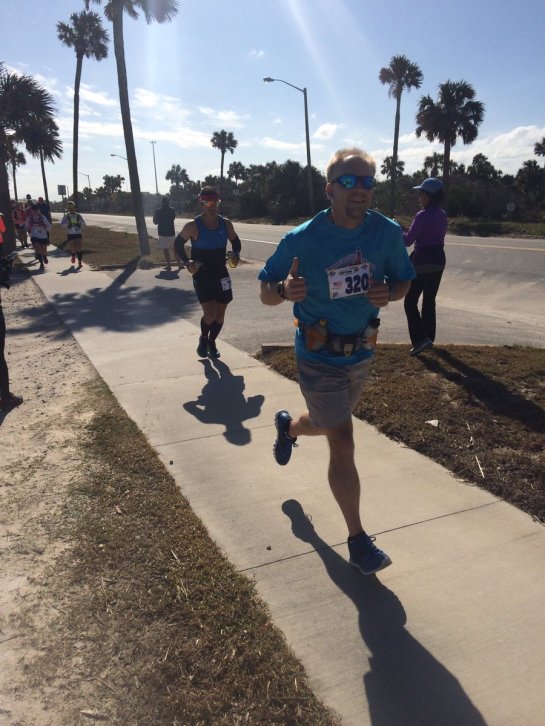 About 0.02 miles into the race I realized that I had everything I needed EXCEPT my nutrition items for the first 11 miles. I had left those items in the cooler in Denny’s van. Lucky for me the very start of the race circled the parking lot so when I got close I dropped out of line and ran to the van to get my food. We’re off to a smashing start! I settled in and headed into the wind for a little less than a mile to the turnaround point, gave Dave a high-five and headed south for the next 47 miles. It didn’t take long to shake the crazy start, and I just stayed at a pace that felt comfortable. I did vary from my training pattern in the first 11 miles because I skipped my every-other mile walk breaks for 1 minute. I was running at a good heart rate (130-135) but my pace was slightly faster than I planned.

After about 3 miles I saw Denny next to the sidewalk trying to get my attention. I didn’t expect to see him until the first aid station around mile 11. While driving by he had noticed that I put my sunglasses on top of my head and was there to swap out the glasses for my hat that I had kept in the van. Awesome idea! Wait, if he could pick up on simple clues like this I think I’m in good hands for the rest of the race. I stayed pretty steady with my pace, liquid and food intake through the first aid station, hitting ten miles in 1:40:03, right at 10 minutes per mile and about 5 minutes ahead of expectation. I gave the credit to the tailwind. Denny was waiting for me with a fresh Gatorade bottle and a fresh Propel water bottle for my hydration belt, as well as a quarter of a PBJ sandwich. I told him I was good and was quickly on my way, hardly even breaking stride. 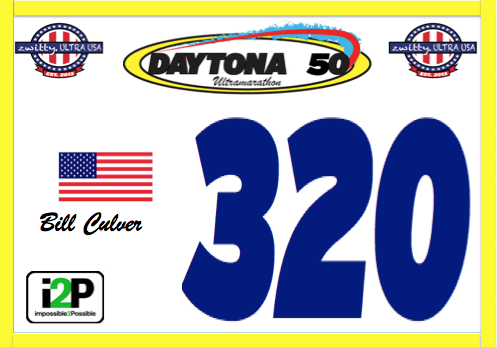 From the aid station we had to cross A1A as the Flagler Beach to Marineland Trail (pronounced sidewalk) continued from this point on the inland side of A1A. The next aid station was about 9 miles away and I had everything I needed with me so I had told Denny to meet me at that aid station. Here I returned to my tried and true run/walk plan of walking for a minute to start each mile. At around mile 17 I saw my dad standing next to where we were running and stopped to say hi for a few seconds. From the start through the second aid station that was my slowest mile because of the stop, but still under 11 minutes. I was feeling strong and running ahead of expectations. That can’t be good.

The second aid station had a timing mat and was somewhere around mile 19.5-20. I crossed the mat at 3:15:12 and quickly caught up with Denny. I swapped bottles, grabbed a sandwich and fresh bags of jelly beans and Combos, plus a small cup of Coke from Dave’s wife Alex who was (wo)manning the aid station. I told Denny that my back had started to tighten up a little and that I needed to catch up with him at some point before the next aid station because I would need my nighttime gear. We agreed on meeting 5 miles down the road and I was off once again. My legs felt good but I knew my back would present an issue before long. Still, I kept to my plan of walking for a minute of each mile and kept a pace of just under 11:00 per mile until I crossed mile 25 in 4:20 and met up with Denny soon after. It wasn’t time for the night gear yet so he gave me fresh bottles and a sandwich and we agreed to meet around 5pm. During mile 27 I started adding additional walk breaks as I was having more back problems and some unsettled stomach concerns just to add to the drama. At some point during mile 28 I saw Denny again and he helped me put on my reflective vest equipped with blinky lights and handed me my headlamp. I went on my way, planning to meet him again at the third aid station, still 3 miles away.

Not long after leaving Denny I found a gas station and headed for their bathroom hoping to fix my uneasy stomach. Mission unsuccessful. I decided to cut back on the liquids and stop eating sugar for a while, thinking I might give my stomach a chance to settle itself. I pulled into the next aid station in Ormond Beach just before mile 31 and took off my hydration belt and tossed my headphones into the van. Perhaps losing the belt would ease the pressure on my back. I wouldn’t be needing the headphones in a few miles because Denny was getting ready to park the van and pace me to the finish. I had a mini orange from the aid station selections and headed back out on the course after crossing A1A for the final time, now carrying my belt bottles. The plan was to make it to mile 35, resupply with Denny and then have him join me running. My pace was now in the 14:00-14:20 range so he had plenty of time to get ready.

The mile 35 meetup went as planned and he dropped off the bottles I had, handed me a sandwich, and we were off. We had about 3.5 miles to go on A1A before we started the first beach segment. It was good to have conversation, but these first couple of miles with my pacer is where I dipped into the dark area of uncertainty. I’ve never run 32 miles before and now I’m past 35, so how far can I actually go? Maybe I can make it to 50, but maybe I can’t. I even had a thought of “maybe I don’t want to,” but I knew that there were a handful of people tracking my progress and cheering me on and I really hate the thought of letting other people down so I pushed through.

We stayed around 15:00 miles from mile 35 through the final aid station at mile 43 where we left the beach and returned to the roads. All that we had left was about 3.5 miles south, a mile around the lighthouse, and then 2 miles on the beach heading north to the finish line. I was feeling more comfortable about finishing, but not yet convinced it would happen. We stayed at the aid station for about 3 minutes. I didn’t get any food, but they had Mountain Dew! A shot of that and we were off. It was now about 8:40 and I was gaining on 9 hours running. I’d never done 6 hours before so I was testing myself pretty well. We came across a couple of people in front of their homes offering us water bottles, which was quite nice to see. One asked us, “How many more of you are there?” I told him that there might be another 150-200 (including the 100-milers), but that some might not be around until tomorrow morning. By his reaction I knew he wasn’t expecting that answer!

Around 9:30 we first saw the lighthouse up close. At this point I knew that I could finish, I just didn’t know if I could continue to hold the blazing 15:20 pace that we were putting down. Denny stopped at one point to top off my bottles (he was carrying extra liquids in his back pack) and he quickly caught up to me. He also mentioned from time to time that he had extra Combos and I should be eating. I didn’t feel like eating but knew I needed the calories. Mile 48 brought us back onto the beach for the home stretch.

Since it was just after 10pm we could only see lights here and there along the beach but couldn’t tell where the finish was. We knew it was in front of us somewhere. After a half mile I saw a red light and announced that the red light might be the clock at the finish. When Denny agreed that it could be I got an energy boost and our running segments got a little longer and a little faster. I started getting butterflies in my stomach because I was nearly done with a 50 freaking mile race! Denny looked at his watch and realized that 10:30 was a possibility for my finish time if we picked it up a little. He said, “Stay with me and you’ll make it” and was I just out of it enough to go along with whatever he said. The 50th mile was faster than any mile I had run in the past 5 hours! I crossed the finish line in 10:30:15 and was greeted and given my finisher’s medal by Alex Krupski. I was slightly disappointed that I failed to meet my best-case scenario goal of 10 hours, mostly because I didn’t follow my own plan, but I was overall thrilled that I finished and overcame my obstacles.

Without the help of Denny Krahe I can’t say for sure that I would have finished this race. I can say that I would not have finished it in the same time or condition that I did. Thank you Denny for giving up your day with your family, driving my supplies around, making the stops quick and easy, and, of course, pacing me when I needed it most. Thanks also to Dave and Alex for putting the race and training runs together. Also, a big thank you to the volunteers and others that helped make this race a reality, and the amazing experience that it was. I’m no world-class ultra runner but I finished what I started – I am an Ultra Runner!

The morning after, sunrise at Ponce Inlet, FL

One thought on “Daytona 50 Recap”